The arms were officially granted on July 24, 1572 (to the Borough of Dunheved, later renamed to Launceston).  A badge was granted on 26 Mar 1906, being the first ever granted to a civic body. The arms of Launceston are Gules a triple circular tower in a pyramidical form Or the first battlements mounted with cannon of the last, all within a bordure Azute charged with eight towers domed on the second. During the English Civil War Launceston was known to be Royale et Loyale to Charles I of England, hence its coat of arms.

At the Heralds’ Visitation of Cornwall, in 1573, the Corporation waited upon the principal king of arms, who, from the old design, elaborated the following and granted the certificate of which this is a copy: 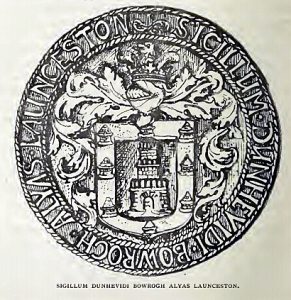 ” These Armes above depicted, that is to saye, gules, a keepe or castell, golde, on Abordure azur, semey Tourett of the secounde, be the auncyent armes of the Borough of Dunheved alias Launceston, in the county of Cornewaill, wiche armes and
creast was registred, confirmed, and allowid, in the tyme of the visytation of Cornewaill, by me Roberte Cooke als Clarencieulx, esquier, princypale herault, and kinge of armes of the east, west, and south parties of this realme of England, from the ryver of Trent, southwarde, unto Thomas Crossig, maior, Thomas Hicks, Samson Pyper, Robert Gorge, Thomas Humphrey, Stevyn Bennet, William Morten, John Fugers, and Olyver Collen, alder- men of the same borough, and they the same armes and creast to
vse, beare, & shewe, by them and their successors in lyke place and offyce, for ever, at their lyberty and pleasure, without lett or interuption of any parson or parsons : In witnes wheirof I, the above saide Clarencieulx, kinge of armes, have hervnto subscribed my name, and sette thervnto the seale of offyce, the xxiiijth of Jully A Dm : 1573, And in the xvth yere of the reigne of or drede souvereigne lady Elizabethe, by the grace of God, Quene of England, Ffraunce, and Irian d, deffender of the faythe, &c.

The device of a triple-towered castle was unquestionably the only one used on the ancient seal of the Borough, and in every such instance, it was the very proper custom of the Heralds to adopt and incorporate the ancient device when designing the arms, simply treating it in heraldic fashion. The seal represents a triple-towered castle, surrounded by its legend, and was the only one used by the Corporation till their arms were granted by Cooke in 1573.